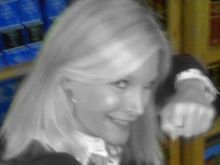 It’s not an entirely accurate statement that …

I got the living krap kicked out of me in a chick fight.

I got the living phucking krap kicked out of me in a chick fight.

Lift your hand and place it back on the keyboard.

I’m not talking about the kind of chick fight where …

Women-folk scratch and claw one another,

And eventually end up making out with one another.

Definitely not that type of chick fight.

The type of chick fight I’m talking about is …

The one where one woman,

Or group of women,

Superiority over another woman.

One of those “I’m better than you” kinda fights …

Where women go no holds barred …

To make sure the …

Less moral, less intelligent, or lower class standing chica is well aware of the identified differences between them and is thoroughly …

You’re probably saying, “But Amy-wan, you’re a Jedi … how could you have gotten the living krap kicked out you in a …”

“Oh, you’re right,” you would correct and rephrase,

“I meant .. but Amy-wan, you’re a Jedi … how could you have gotten the living phucking krap kicked out of you in a chick fight?”

One of the down sides of not growing up natal,

In addition to the whole just going through the motions, being internally miserable at best, and not even coming close to living life things,

Is that I was totally klueless when it came to the whole chick fighting scene.

I didn’t know the warning signs that a chick fight was developing,

That I was in peril,

Who would have my back,

How to defend myself.

I was so klueless that …

Not only did I get the living phucking krap kicked out of me,

But I was actually in two separate chick fights at the same time.

And to make matters worse,

I was not even aware I was in either chick fight until it was too late,

And I laid broken and bloodied from both.

I learned a few things from the experience,

And consistent with the whole theme of sharing my life here so others can learn from my mistakes,

This Chick Fight mini-series covers the Uno, Dos, and Tres of what I learned from the experience.

Peace be with you.

This post is the first in a series of five (1 of 5). As each of the posts are published, the links below will go live. And contrary to most of my mini-series, the only post that I have yet to complete is Aftermath, meaning it’s my plan to post one a day in successive days. Enjoy. She shoots, she scores !